Trust in the Future

Trust in the Future

WITH THE CONSTRUCTION of the Cairn, an important axis of Remembrance was established between Lochnagar Crater, representing the starting point of the attack on 1 July 1916, and Contalmaison, representing the farthest position reached that tragic morning. Our previously quiet village is now a centre of pilgrimage – particularly for school children, who turn up by the coach-load in all weathers, drawn by a story more engaging than any in the sports pages of the current papers. With Donald Bell around the corner and the 2010 memorial to the English Footballers’ battalions just along the road at Longueval, Contalmaison has become one of the most historically significant locations on the Western Front. For the locals (123 of them at the last census) it’s been an interesting journey. They treat the Cairn is if it were their own and look forward to our annual 1 July ceremony as the key date in their civic calendar. We told them from the outset that having built the Cairn we’d return every year. It’s not an obligation; it’s an immense privilege. We did not anticipate, however, how important the ceremony would become and how the status of Contalmaison would grow in comparison with other villages on the Somme. When Bernard Sénéchal stood down as maire in 2008 his replacement, Patricia Leroy immediately confirmed the continued support of the conseil municipal – a considerable commitment bearing in mind the level of responsibility that has devolved upon her office over the past few years. 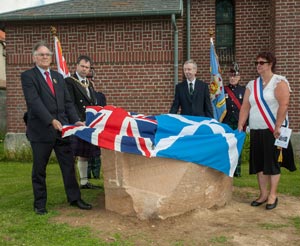 We’ve now held ten ceremonies in the village – each one liberally attended (by ever-growing numbers) and supported by the local and national governments of both Scotland and France. You’ll see some more of the photographs in our gallery section. The Scottish Government has been represented at ministerial level every year and the City of Edinburgh (in spite of competing Royal commitments) has now been now represented by three Lord Provosts (Lesley Hinds, George Grubb and Donald Wilson), as well as several senior councillors. This is truly a small corner of Scotland in a not so foreign field.

Our services have been consistently described as among the most moving on the Western Front, always employing humour because that’s the way we think the lads would like us to remember them. In 2007 our coach reversed down the grass track towards Gordon Dump Cemetery. A slavering erse near the front (not me, for once) told our driver, Alex Ketchen, that we’d be ok. But there’s a soft bit at the foot of the incline and the bus got stuck. Jean-Luc Tryhoen, maire adjoint of Contalmaison personally supervised our rescue – summoning one of his largest tractors to pull us out. Half an hour later he sent for another tractor to rescue the first tractor and within the hour a third tractor had arrived to rescue all three vehicles. We are part of the folklore of the Somme now – amiable Scottish friends who bring whisky and music and laughter along with an abiding admiration for the brave men who came before us. 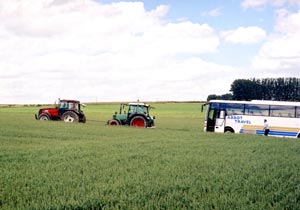 In 2005 Julian Hutchings presented the village with twin flagpoles – one for the Scottish Saltire and one for the French Tricolour – Europe’s oldest alliance cemented on the Somme. In 2008 the Willie Bauld Club of Edinburgh (named after one of Hearts’ two greatest centre-forwards) gifted the village a handsome memorial bench, carved with poppies, and a picnic table for casual visitors to take their ease while they listen to the birdsong and enjoy the sun – the same birds (as Richard Dunning once movingly pointed out) and the same sun as the lads who fell in 1916.

The Town Hall, tucked in behind the church, has become a veritable museum of Scottish football – inevitably favouring of Heart of Midlothian, but paying due respect to the other teams, too. Falkirk, Hibernian and Raith Rovers are all represented – as the Colonel would have wished. It’s a popular attraction every 1 July – after our ceremony and before the official Contalmaison Lunch, a relatively new addition to the programme, but now as firmly established as the Cairn itself. In company with the locals we celebrate the life of the battalion and the friendships forged from its sacrifice.

2006 saw the 90th anniversary of the opening of the Battle of the Somme. It was also the year that we founded the McCrae’s Battalion Trust. We wanted to secure the future of the memorial site and to ensure that the story of the battalion would live on. McCrae’s Battalion Trust is a registered Scottish charity with a formal educational and commemorative purpose. In recent years our official pilgrimage has been joined by selected sixth-form students from West Calder High School and from several schools within the catchment area of Falkirk Council – thanks largely to the efforts of West Calder’s Sandy Potter and Falkirk’s provost, Pat Reid. The future of Remembrance lies with the young and we’re keen to encourage the participation that age group. We’ve also been joined by serving soldiers from the Army’s Personnel Recovery Unit at Craigiehall, near Edinburgh. These young men are the same age and have the same challenging injuries suffered by the lads of 1916. 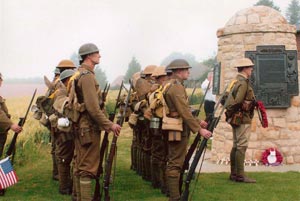 Our annual pilgrimage is distinguished by the presence of a Colour Party from the Royal Scots Association and a piper from the Royal Scots Association Pipe Band. Their contribution to the ceremonial purpose of our visit is incalculable. It is the embodiment of the golden thread that ties the past to the present: Royal Scots remembering the men of their peerless regiment, who fell in battle one hundred years ago. It would not be the same without them.

In 2009 we were joined by Taff Gillingham and a detachment of the Khaki Chums, kitted out precisely in the uniforms and equipment worn by the 16th Royal Scots on 1 July 1916. Taff and his pal, Alf Godden, had gone to painstaking lengths to get every detail right – so much so that I half expected a couple of genuine bullet wounds. The Chums had been impossible to contact the previous evening. Their mobile phones were switched off – because they didn’t have them in 1916. They bivouacked in the fields overnight and marched across to Contalmaison in the morning. When our coach arrived in the village we found them paraded beside the Cairn like ghosts from another time. Their contribution gave us perhaps our most moving ceremony to date. 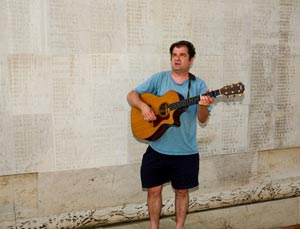 For me, the most moving moment of the past decade came in 2010, when my friend Craig Herbertson performed his song, Hearts of Glory, at Thiepval Memorial under the names of the 16th Royal Scots ‘missing’. Craig wrote the song after reading McCrae’s Battalion and visited me in Edinburgh to see if I thought it was an appropriate tribute. That first afternoon, he persisted in calling me ‘sir’. Familiarity breeds contempt, so he no longer does that. While Craig was singing, the historian Colin Campbell gave a simultaneous translation to a group of French schoolchildren and helped to dry their tears at the end. 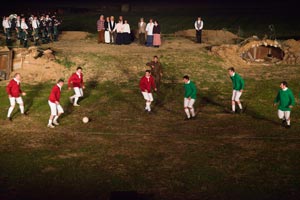 In 2011 we were honoured to have the story of McCrae’s featured as the principal tableaux in the famous Pozières ‘Son et Lumière’ spectacle. Every night for a week, the raising of the battalion, the training of the battalion and the destruction of the battalion were performed by a talented cast of locals in front of an international audience. The highlight was a depiction (in authentic contemporary kits) of the 1914 ‘derby’ match between Heart of Midlothian and their Edinburgh rivals Hibernian, during which supporters of both teams signed up for the battalion together. Fast forward 18 months and many of those lads died together in the fields not far from where the replay took place. Poignant doesn’t even come close. 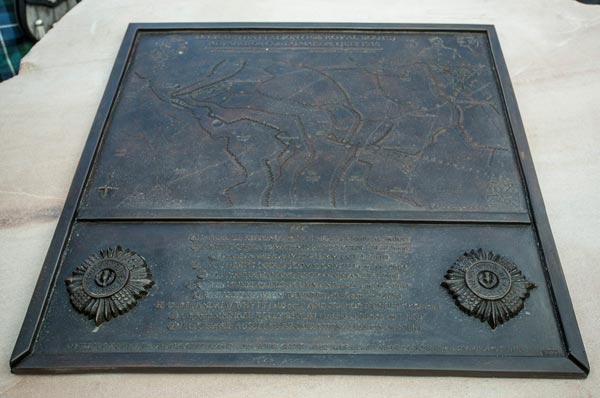 McCrae’s Battalion Trust has achieved a great deal on a very limited budget and sometimes we have to be patient. In 2006 I designed a bronze orientation table for the village, a map of the 34th Division frontage in 1916, showing the formidable German trench system between La Boisselle and Contalmaison. It was based on the endpaper map in McCrae’s Battalion and was a response to requests from visitors to the village who were struggling to understand its contemporary setting. At the same time as this was happening, BBC Scotland commissioned a documentary on the battalion, which would eventually be aired as Supreme Sacrifice. The fee for the film gave us sufficient funds to commission Farquhar Ogilvie-Laing to produce the bronze, but it was 2012 before we had the money to install it. I selected a big block of Clashach sandstone from Gavin Tennant’s quarry in Elgin (where the stone for the Cairn was sourced) and in September of that year went out to Contalmaison with my friends, David Speed, Bob Craig and Eddie Dalgleish to supervise the installation. The stone was oriented using a compass which was carried on the first day of the Somme by Second Lieutenant Tom Beech of the 15th Royal Scots. The table was unveiled on 1 July 2012 by Donald Wilson (Lord Provost of Edinburgh), Pat Reid (Provost of Falkirk), Patricia Leroy (Maire of Contalmaison) and Brian Adam (Minister for Parliamentary Business in the Scottish Government). Brian was immensely courageous. He died in April 2013 after a long battle with cancer. 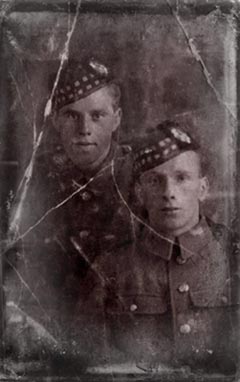 Look closely at the bronze if you visit the village. We’ve incorporated a number of cartoons. The originals were drawn by Fred Bland, a 23-year-old lithographic artist from Edinburgh (on the left in this photograph), who was one of the first volunteers for the battalion. Fred was killed by a German shell on 23 May 1916 and he’s buried not far away at Bécourt Military Cemetery – Plot I, Row P, Grave 26. His sketchbook survived the war, so we thought we’d let him help with the plaque. Fred’s best pal, Campbell Munro (on the right in the photo), was killed during the advance on 1 July and is commemorated at Thiepval. He was 21.

At our ceremony in 2013 the Scottish Government was represented by Keith Brown, whose ministerial brief includes Veterans’ Affairs. Keith is a veteran himself, having served as a young Royal Marine in the Falklands War. That makes him unusual among modern politicians. His speech at our informal Remembrance Lunch in the Salle de Fêtes was engaging and informed and we look forward to welcoming him back in the future. For the next five years that future is a series of important centenaries. Our little village will find itself in the world’s spotlight as the story of Scotland’s Sporting Battalion fires the imagination of journalists and filmmakers. Patricia Leroy has applied for UNESCO World Heritage Status and we await the response with interest. We’ll also see a continued development of Contalmaison’s friendship with the City of Edinburgh. Scotland has a home on the Somme now and the McCrae’s Battalion Trust is pleased to hear from anyone who’s interested in joining us there or visiting independently. Get in touch through our contact page and we’ll get back to you immediately.