For the sake of Little Belgium

For the sake of Little Belgium 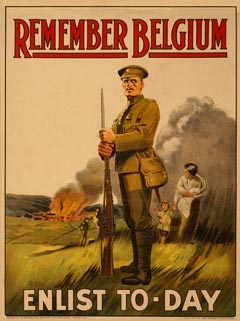 ON 4 AUGUST 1914 the Kaiser’s armies marched across the frontier into neutral Belgium. Great Britain, Belgium’s guarantor, mobilised at once and issued an ultimatum demanding withdrawal on pain of military intervention. Germany took no notice: by midnight the countries were at war.
The following day Earl Kitchener of Khartoum was appointed Secretary of State at the War Office and immediately persuaded the Cabinet to sanction the enlargement of the Army by 500,000 men – more than double the peacetime Regular establishment. In the absence of conscription the voluntary principle would continue to apply. Throughout that summer and autumn young men flocked to the Colours, eager for the chance to ‘do their bit’ before hostilities came to a close. 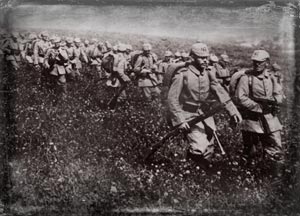 But as the crisis deepened it became clear that the war would not end by Christmas. The tiny British Expeditionary Force, dispatched to the continent early in August, fought a series of bloody rearguard actions at Mons, Landrecies, Le Cateau, and Ypres, suffering heavy losses in the process. Bleak newspaper headlines and growing casualty lists infuriated the Government, alarmed the public, and persuaded a misguided minority of self-righteous onlookers to identify a scapegoat. In this darkest hour, any man who failed to volunteer was no more than a cowardly shirker. And the worst shirker of all was a shirker with a football.