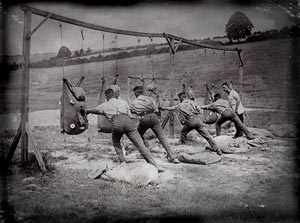 THE RESPONSE to Lord Kitchener’s call was overwhelming. So many men had come forward, however, that the normal peacetime recruiting procedures broke down. There were insufficient officers and N.C.O.s to train the new intakes; insufficient uniforms to clothe them, insufficient boots to shoe them and insufficient rifles to equip them. Under peacetime contracts, production of the Short Magazine Lee Enfield was running at only 6,000 every month. Ammunition (for musketry training) was equally scarce.

Initially many new units were clad in Navy blue ’emergency serge’ – ‘firemen’s outfits’, they called them. They drilled with broomsticks and imaginary bayonets. Sergeants and corporals might (with luck) have some pre-war military service; more likely they owed their stripes to a pre-war spell in the Boys’ Brigade. Junior officers were appointed from the ranks of the school and university Cadet Corps; senior officers from the professions or the world of business. 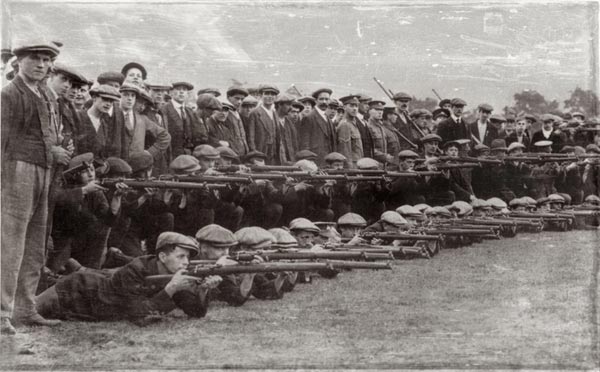 As the war slowly settled into trench deadlock, military camps sprang up all over the country. Salisbury Plain was covered in canvas; the small Yorkshire market town of Ripon was dwarfed by a tented camp capable (eventually) of billeting 30,000 men. It had its own light railway, 10 miles of main roads, 16 miles of secondary roads and 12 miles of footpaths.

Slope Arms! Fix Bayonets! Then Present!
They fairly put you through it!
And as you stagger to your tent,
The sergeant shouts ‘Jump to it!’
(Unidentified Kitchener recruit, September 1915)